By continuing to browse this website or by clicking 'I Accept', you agree to the use of cookies. Cookies are stored on your computer or mobile device and enhance your site experience. To learn more about how we use cookies, you can click the 'Learn More' button.

Learn More
Skip to the end of the images gallery

Skip to the beginning of the images gallery

For over 30 years, Anotec has been crafting the world’s best high silicon cast iron anodes.  Farwest represents Anotec as a distributor and licensed manufacture and custom builds the Anotec line of anodes.

The Anotec proprietary chill cast process assures consistent weight and a superior (stronger) microstructure, combating corrosion and outperforming the competition by up to 20%.

Note:  If you have questions about anode applications, contact a Farwest representative for assistance.

Tubular anodes are popular for their increased surface area, higher current output, centered cable connection and enhanced sealing properties due to the additional sealing materials used inside the anode.

Recommended cables sizes are #8, #6 and #4 AWG copper cable, which range in pull strengh from 400 pounds to 1,300 pounds. Available cable insulation types include High Molecular Weight Polyethylene (HMWPE) or dual insulated Halar/HMWPE or Kynar/HMWPE for use in high chloride environments. After the connection is made, it can be sealed with polyurethane or a combination of polyurethane and Novoid A electrical sealant. 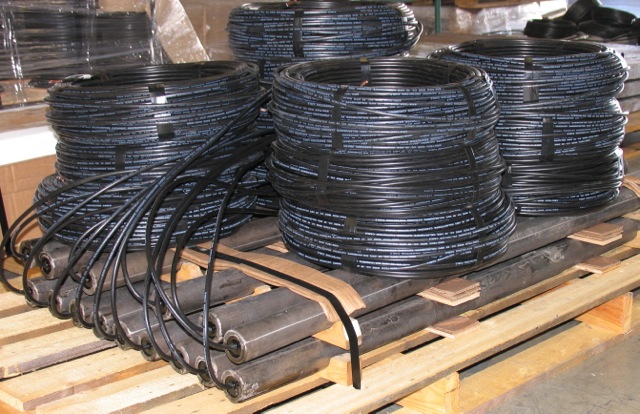 The consumption rate of High Silicon Chrome Cast Iron anodes has been found to be between 0.2 and 1.2 pounds per ampere-year. For anodes of the same chemistry and microstructure, variance in consumption is primarily due to the chemical and physical characteristics of the anode environment. The consumption rate does not appear to be significantly affected by current density (amperes per unit area of anode surface). The use of coke breeze around the anode in soil ground beds will tend to lower the consumption rate. A generally accepted design guideline for anodes buried in coke breeze is 0.7 pounds per amp-year.

The maximum stable current density of discharge may be limited by the environment regardless of the anode type. In free flowing water or in very wet soil ground beds, there is very little restriction on current density. However, anodes buried in clay soils tend to suffer "electro osmotic drying", a phenomenon of magnitude directly proportional to current density. For any particular soil with electro osmotic characteristics there will tend to be a critical maximum current density at the anode soil (or coke breeze to soil) interface, above which progressive drying occurs, with corresponding increases in anode-soil resistance. Drying is usually reversible by increasing soil moisture and/or lowering current density.

As a guideline to minimization of electro osmotic drying in groundbeds installed in clay soils, use of the following design maxima has resulted in stability of 90 to 95 percent of beds in areas of high osmotic drying potential.

Note: For greater success, limit current density to less than 100 mA/sq ft for soils of less than 1500 ohm cm resistivity.

Who Viewed This Also Viewed