By continuing to browse this website or by clicking 'I Accept', you agree to the use of cookies. Cookies are stored on your computer or mobile device and enhance your site experience. To learn more about how we use cookies, you can click the 'Learn More' button.

Learn More
Skip to the end of the images gallery

Skip to the beginning of the images gallery 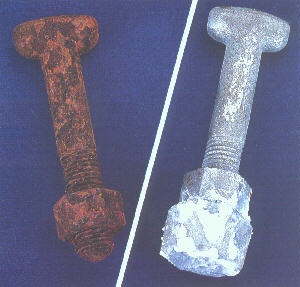 After being submerged in concentrated salt water for 5,000 hours, the unprotected iron T-Bolt on the left is totally corroded and unusable.

The MARS Zinc Cap protected T-Bolt on the right remains in its original condition!

In 1972 the National Association of Corrosion Engineers estimated the annual cost of corrosion at $10 billion. A more extensive study conducted in 1976 by the Battelle Memorial Research Institute placed the annual loss at closer to $70 billion annually!

Shocked by these findings, the U.S. Congress ordered the Department of Commerce to verify these figures. Their analysis, published in 1982, estimated the cost to be $126.3 billion a year!

When combining the corrosion cost of the nation's highways, water, waste water and gas systems, underground storage tanks, corrosion-related pollution, etc., the annual loss has grown to a staggering $300 billion. This is greater than 5% of the Gross National Product and a cost of nearly $1,500 a year per citizen!

The most common type of corrosion cell is a simple Battery. The outer case is made of a zinc alloy having a negative charge, the anode. The center post is a carbon rod having a positive charge, the cathode. Separating the two is a filler, the electrolyte. In operation, the positive current charge rushes from the zinc anode to the cathode, causing eventual pitting of the zinc case. As the electrochemical activity stabilizes, the battery loses strength. The aggressive nature of the electrolyte determines the current output and the life of the battery.

The same phenomenon occurs in submerged water and gas mains. The pipes and fittings are buried in an electrolyte, the moist soil. The unprotected lines and fittings, the cathode, have a positive charge and the current generated is discharged directly into the soil in the electrochemical process of corrosion.

Corrosion failures of water and gas mains are directly related to the failure of either the bolt/nut combination, or the flanges secured by the combination.

By adding a sacrificial metal, zinc caps, the natural current flow is altered, flowing from the anode (the zinc caps) to the cathode (the pipe and fittings), through the electrolyte (the moist soil) and preventing corrosion.

MARS Zinc Caps are the result of years of development

Immediately after World War II, the U.S. Navy began installing rolled zinc plates on the sterns of vessels as a means of protecting a variety of copper alloy and brass propellers and shafts from pitting and corrosion.

Only mildly successful, the Navy commissioned an extensive study of Zinc Anode composition to determine the feasibility of improving performance. As a result, the U.S. Government issued MIL Spec MIL-A-18001A in 1956 for the composition of Zinc Anodes. Further modifications eventually evolved into the present MIL-A-18001J specification adhered to today. The composition of metals and their limits are as follows:

All MARS Zinc Caps conform to these specifications:

MARS Zinc Caps meet all MIL-A-18001J and ASTM B418-80 specifications. In use, MARS Zinc Caps should be installed on all exposed bolts of all pipeline fittings and valves in soil having a resistivity value of 7000 or less. Refer to the figure below for life expectancy under various soil conditions. 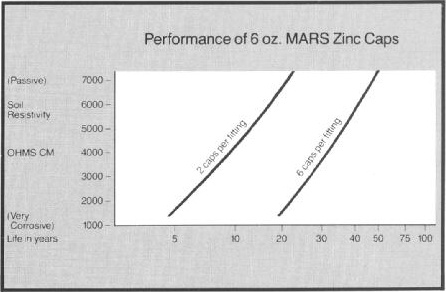 Who Viewed This Also Viewed